A Day In The Life de The Beatles

Paroles de chanson A Day In The Life de The Beatles 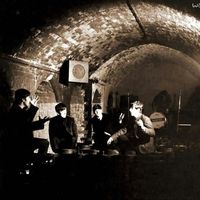 A Day In The Life
The Beatles
Photos

He blew his mind out in a carHe didn't notice that the lights had changedA crowd of people stood and staredThey'd seen his face beforeNobody was really sure if he was from the house of lords.

I saw a film today, oh boyThe english army had just won the warA crowd of people turned awayBut I just had a lookHaving read the bookI'd love to turn you on.

Woke up, fell out of bed,Dragged a comb across my headFound my way downstairs and drank a cup,And looking up I noticed I was late.

Found my coat and grabbed my hatMade the bus in seconds flatFound my way upstairs and had a smoke,And somebody spoke and I went into a dream

I read the news today, oh boyFour thousand holes in blackburn, lancashireAnd though the holes were rather smallThey had to count them allNow they know how many holes it takes to fill the albert hall.I'd love to turn you on.