The Man In The Mask de Malvina Reynolds 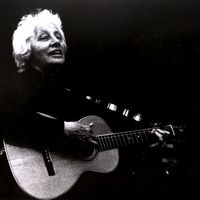 The Man In The Mask
Malvina Reynolds
Photos

Come sit down beside me before the big T.V.And watch the funny pictures they have there to look at,Shampoo for your hair and the last polar bear,And the man on the moon who was walking aroundThen left, leaving junk on the once virgin ground.

There's old timey movies with old fashioned dresses,The kidnap of babies and other such messes,There's football and baseball and guys selling cars,And then there's The Man in the Mask.

Chorus:They say it's his face, but I just can't believe it.It looks like a mask that I saw in the store.It talks with deep feeling about ending some warAnd stopping inflation, and it's so fantastic,You'll cry while you're laughing, and roll on the floor.

Every four years he puts a new mask on.Each one is worse than the one he had before,But the words are the same and the same earnest manner,About ending inflation and stopping the war.

The sponsors paid out a million of millionsTo get him up there with his magic routine,But it's really a bargain, 'cause there's such a marginIn war and inflation and the big T.V. screenThat gives us The Man in the Mask.