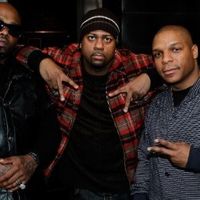 HupGet up get up but don't push mecos I ain't mooshy mooshy, you can't mash meYou chocolate bastard with your smile, your face looks ashy

Sendin detrip witta free trip to blast out outerSee this, cos I'm that nigga that'll leave you ass out like G-strings

Meanin I'm fienin, your heart trips when it stay at workSo fuck fear you fear-fuck, one jerk I'll make your head hurt

The punani, they're making pairs perk, who'll dare flirtI get kitty's from your city, just near where your mans work

I be on that ass like ol' mole, turnin your whole show slow-moCos you're too good to corroso

I'm on and off so you know my shit ain't partialPardon me, packin arsenals, takin knees and nostrils

Our style is savagery, you try to be the badder GYou ain't even the man, you just the filling, where's the cavity?Father be grabbin it, gravity, have the gravity grabbinActually after we nigga naturally have to meet

One check to the chin and you'll be bust quicker than liquorAw shit, pop her chain and lock her rock, a city slickerSlick a rhyme, kick or vick her, knock her without a popperI take the cake, took the chain but left the lock upLove me or leave me, hate me or like meMight be gettin feisty, fuck yeah I'm sheistyShit yeah, I fit there, *?sqwin?* your shit wearYou're a trick until you niggered me a bitch without liquidSome thank me for puttin the hanky in pankySlappin stanky like lightning, stickin Yankees like Benjamin FrankyFuck buyin kitty cases and city lightsJust give my loot, get your licks and get all the high titties rightBut then I'm into what you bitches is sayinSo I wasn't really feelin on her ass, I was just massagin her brainThe objects that I learned from the projectsTry Treach I bet, and get your throat choked like my necks

Test me, touch me and lay next to the rest of the bestThe rusty monks or ???? who tried to fuck meBut see this is where I BOOM and ZOOMJust drive a line like a cartoonist on some SOON shit

Adidas couldn't read us so they freed usThen we tried Reebok from a cheater, succeeded then got weededOh Anna, rip of some grandma's, no my Grandma from Santa AnaTo Atlanta where cops ain't a-feared and niggas wear 'dannasNow tell ya lady that I'm crazy when I'm summinThere's a party and I'm out and guess who's comin